We meet the London design duo who explore kinetics and repetition in their impressive sculptural designs for the likes of Hermès, ITV and V&A.
28.09.20 Words by Wrap. Studio photography by Ollie Trenchard 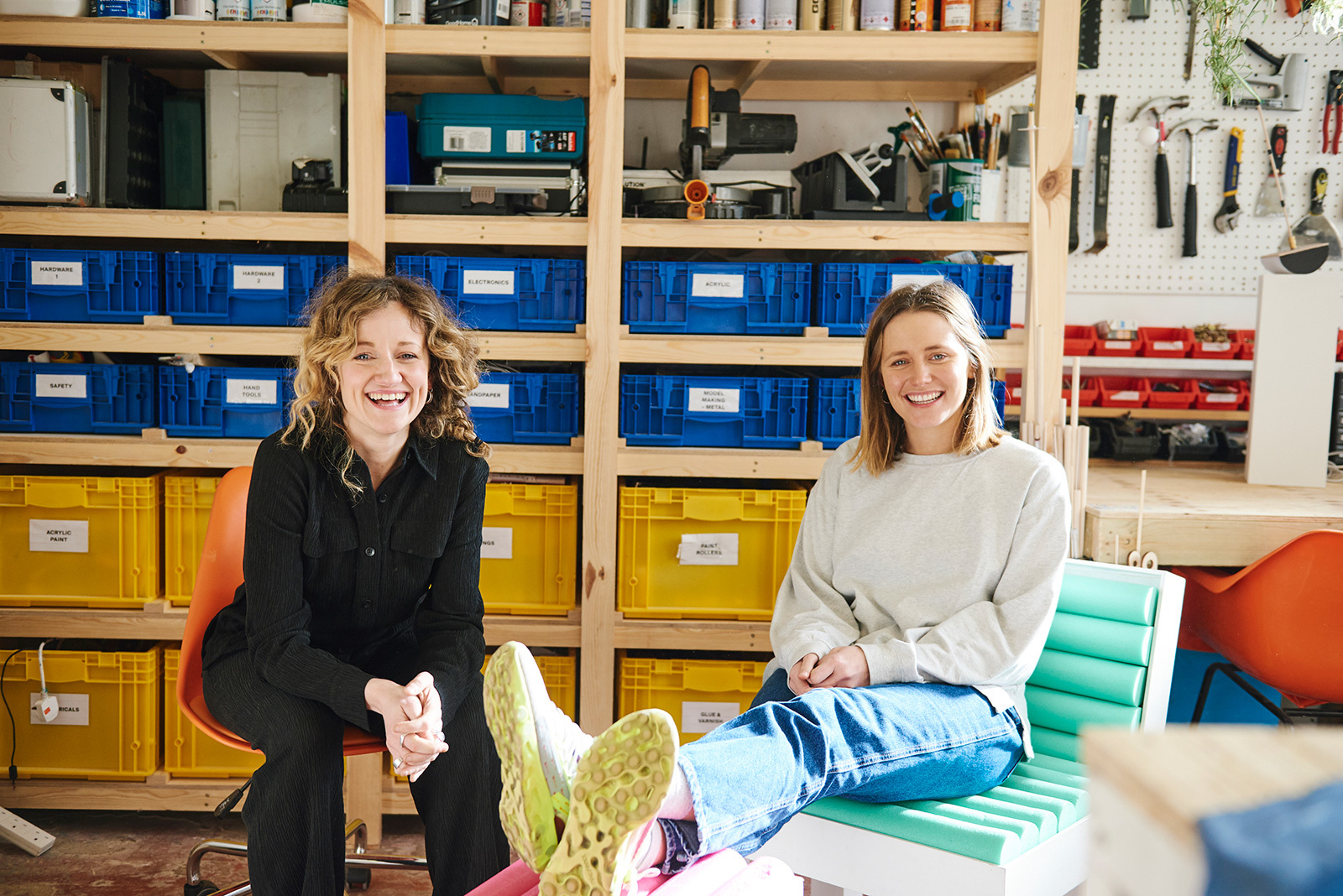 Full of playful invention, design studio Isabel + Helen create stylish graphic-looking contraptions and sculptures – often mesmerising in their use of motion. Cofounded by university friends Isabel Gibson and Helen Chesner, the pair’s impressive practice has spanned retail design, window displays and sculptures for interactive exhibitions with their clients including fashion superstars Hermès and Craig Green, Adobe and ITV, and London’s V&A Museum. Visiting their studio in Forest Hill, Wrap sits down with the design duo to talk about how they first started working together, their milestone projects and how they overcame some of the challenges of lockdown.

You’ve been at this new studio in Forest Hill in south east London for just over a year now. What’s it been like?
We moved here last February because our old studio was being knocked down. All the resources there were great—it was on an industrial estate off Old Kent Road and literally had everything we could need; DIY shops, laser cutters, a vinyl guy—but in a way that access is less important now, because as we’ve developed, we’ve moved away from doing a lot of the hands-on production ourselves. It was good timing really; we were ready for something new—if you don’t change things up a bit sometimes, things can get quite repetitive.

Our new space is part of an old school building and has a completely different vibe. It feels like we’re in the countryside; it’s calm and quiet and there’s so much space—the ceilings are really high, and we often spill out into the garden. Over the past five years we’ve built up quite a selection of equipment, so we’ve got nearly everything here that we need. 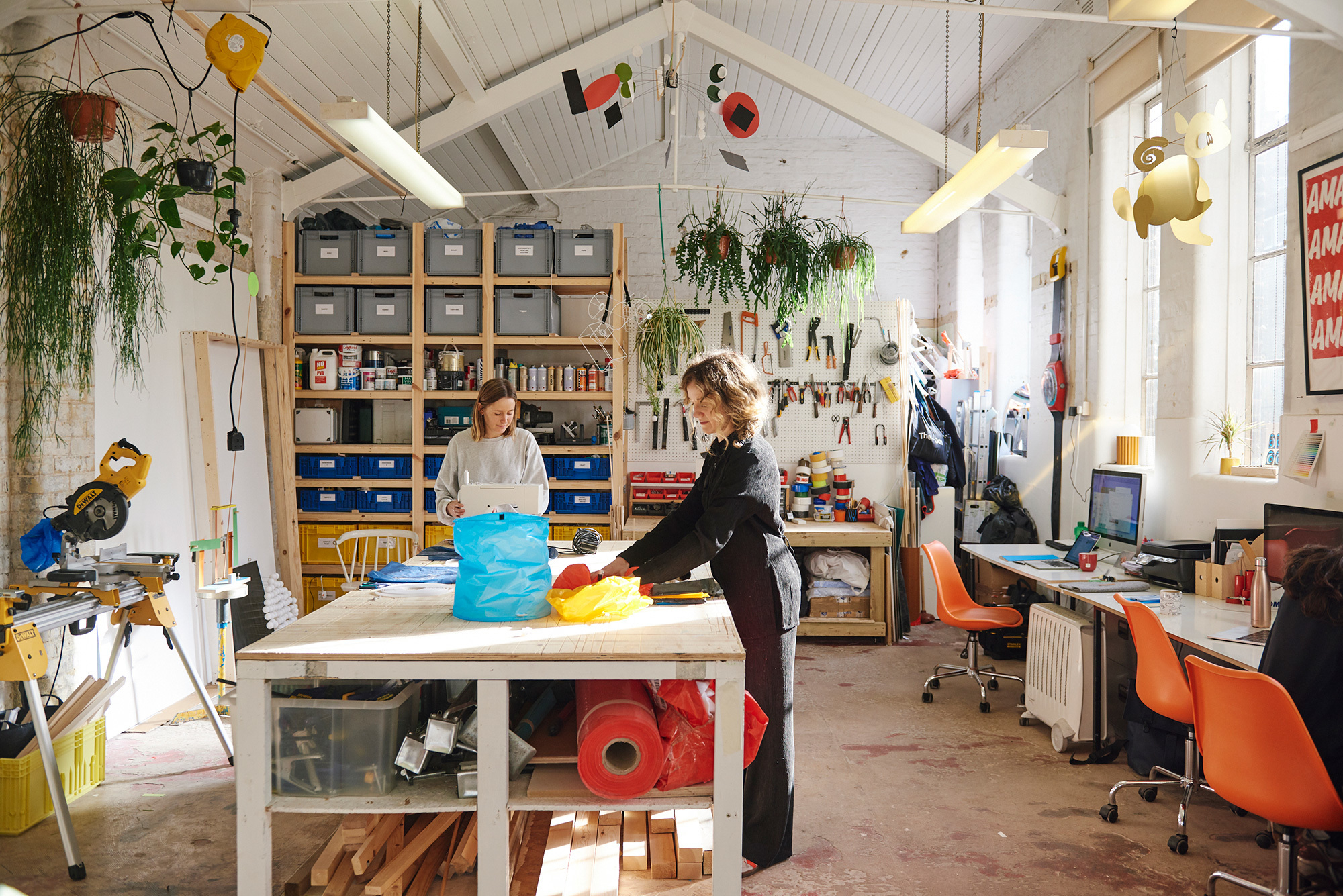 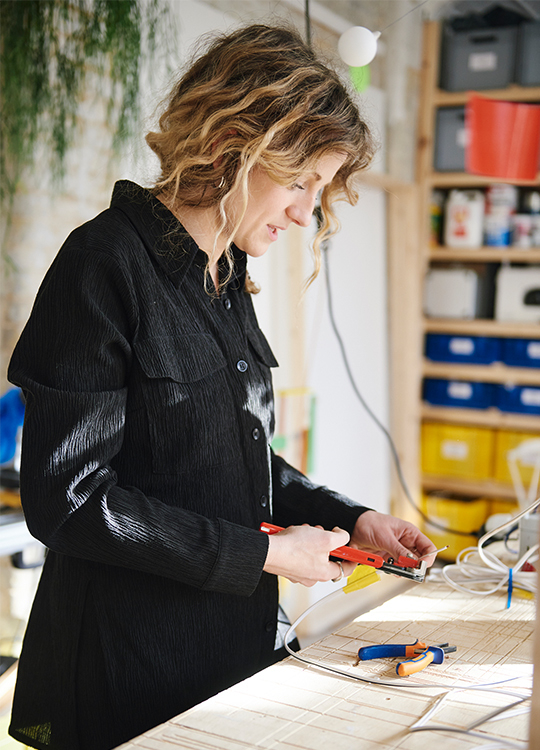 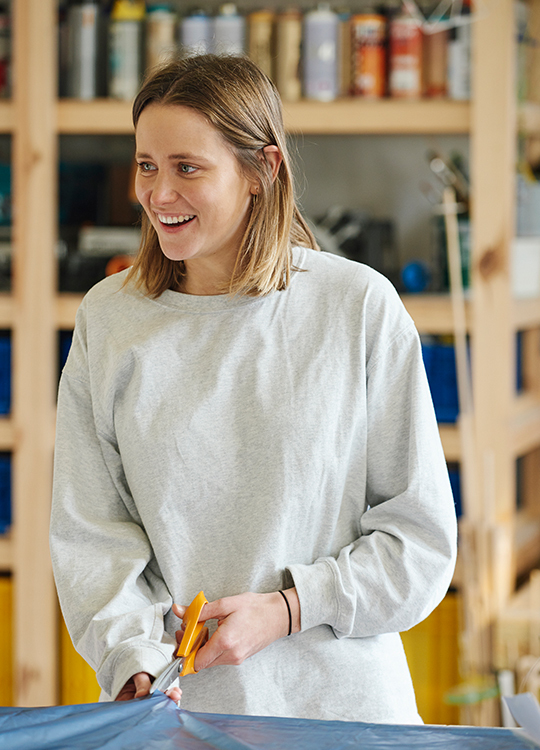 Isabel + Helen
"We still tinker around in the studio at the workbench, experimenting and making smaller models. Each project is about exploring new mediums or creating a new type of movement—that’s the really fun bit for us!"

Were you able to keep working and coming into the studio during lockdown?
No, we had to learn to work separately from our own homes, which meant a lot of phone sketches and FaceTiming, as well as using low-fi materials like card, straws and wooden barbecue sticks to test out our ideas. It made us realise how important our discussions are—we often ended up with phones glued to our ears for hours, trying to describe specific ideas or movements to each other.

You mentioned a transition away from hands-on making. Is that a natural progression as you become more established as a studio?
Yeah, at the beginning you have to do it all—the designing and the making—but with experience and bigger budgets, we’ve been able to outsource production to people with more expertise. It means the project outcomes are far beyond what we could achieve alone. We do still tinker around in the studio at the workbench, experimenting and making smaller models. Each project is about exploring new mediums or creating a new type of movement—that’s the really fun bit for us!

We love your recent circle paintings, and the contraptions you make to create them. What inspired the project?
We started the series in 2018, but it has really come into its own over lockdown. It’s about creating ‘almost perfect’, but entirely unique circles using contraptions handmade from objects that we find around us, like whisks, fans, and sanders. The project explores that mix of the imperfect human hand setting up the contraption, and then the accuracy and repetitive movements of the machines that complete the process. We’re interested in the process itself just as much as the output; it’s the performance of the mechanism and the revelation of the painting as it’s made, that captivates us. 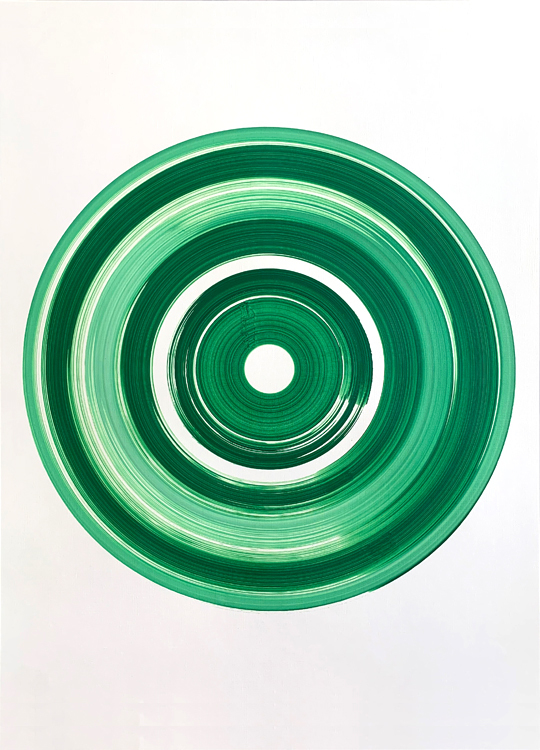 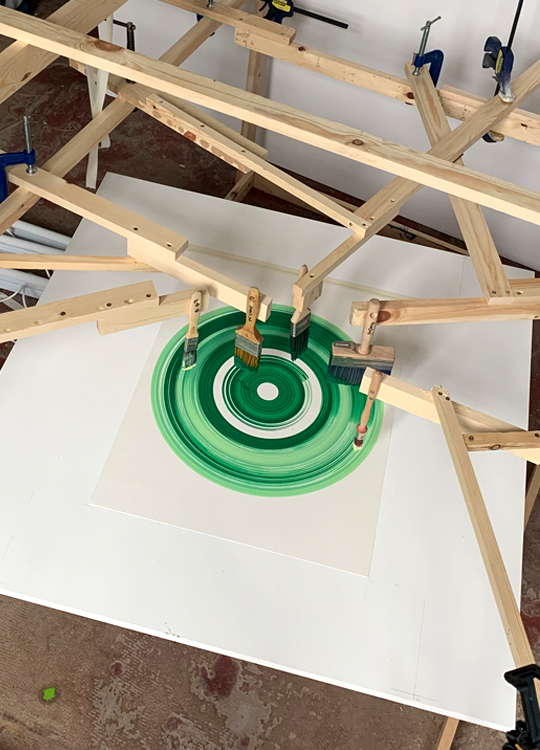 Isabel + Helen
"We’re interested in the process itself just as much as the output; it’s the performance of the mechanism and the revelation of the painting as it’s made, that captivates us."

Going back to the beginning, when did you first start working together?
We started collaborating not long after we both graduated from Graphic Design & Communication at Chelsea College of Art, and initially bonded over our shared love of the analogue, and our tangible, quite physical approach to designing. We didn’t know in the beginning that we would set up a design studio together, but just we worked on a few projects, like the V&A Playground, and things developed from there. We found that we were drawn to the same things—timeless design like you find in the Science Museum, and the playful energy of childhood toys such as Jumping Jacks and Newton’s Cradle. These elements often appear in our work now, as we create contraptions and sculptures that have a similar simple gratification.

The V&A Playground was the first time you used kinetic elements for a project. What did you make?
We were asked to create an installation for an evening celebrating Russian Art & Culture. Inspired by the Constructivist movement, we made a ‘playground’ of four different interactive shapes (see images below). Initially, it was about encouraging people to interact and play, but we became really interested in how, in making the shapes move, the person becomes part of the vehicle themselves.

Another early ‘kinetic’ project was your installation for the graphic art fair Pick Me Up at Somerset House in 2016. Tell us about your instruments.
We spent six weeks making five different automated instruments that we called ‘Noise Makers’. Using simple spinning motors, we made a different movement and sound for each of them. This really helped us learn about how things move and work, so the installation was an amazing grounding for future projects. 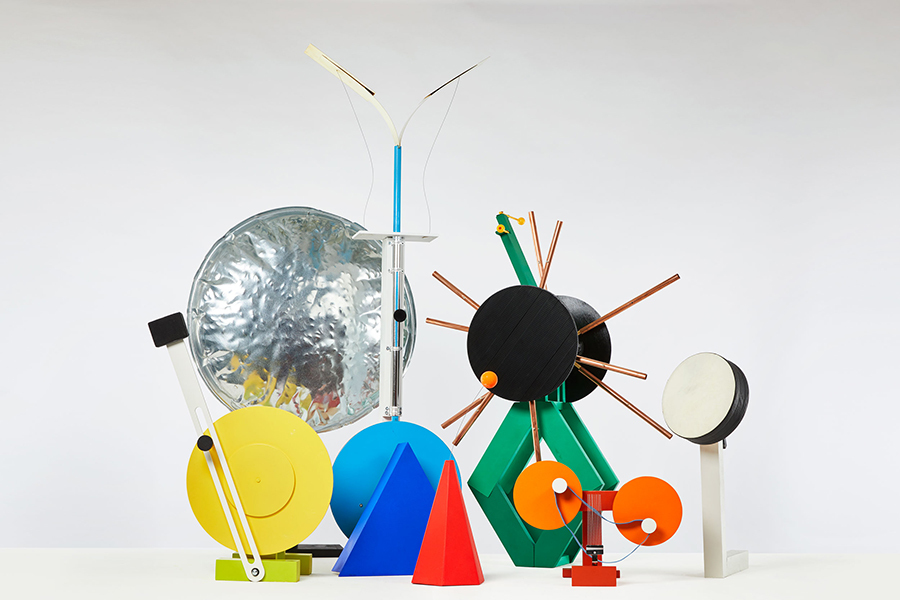 Fast-forward four years and your clients now include incredible brands such as ITV, Adobe, Craig Green and Hermès. Can we delve into your work with Hermès a bit more…
We’ve worked with them on four projects now—including window and terrace displays, and press events, and our latest ‘Innovations’-themed windows were installed in July. When briefing us for that project, the team told us about top-secret manufacturing processes unique to Hermès and we found this idea of mystery really exciting! We set out to show this in our window designs somehow, creating a story where there are these magical machines but they’re all under wraps and tucked away from prying eyes.

We designed our first set of windows for them back in 2018. The theme was ‘Play’ and with our interest in the repetitive movements of machines, we ended up thinking about “if something without a conscience could play, how would it play?!”. We came up with various scenarios based on this idea of ‘mischievous machines’, so, we had windscreen wipers with Hermès scarfs attached, playing hide and seek with products behind, and another with ping pong balls being shot back and forth through the hoops of handbags. It was a continuous game! We were always watching and waiting for it to go wrong. The machines were really accurate but sometimes the ping pong balls would get lodged somewhere funny.

What were the most challenging and exciting parts of that project?
Coming up with the ideas was the fun bit. The overall art direction was more challenging because, until you see it altogether, you’re not sure how it’s going to overlay. We ended up going with this idea of everything being whited-out and stripped back, giving it a futuristic feel, so that the Hermès products—which are really colourful—stood out amongst all the noise.

And working with the Hermès production team is always great. Their space is amazing; it’s fully kitted-out and there are about 10 people working on each project. They have a big room where they lay out how everything will look, so you can just walk around the windows like they’re already installed. 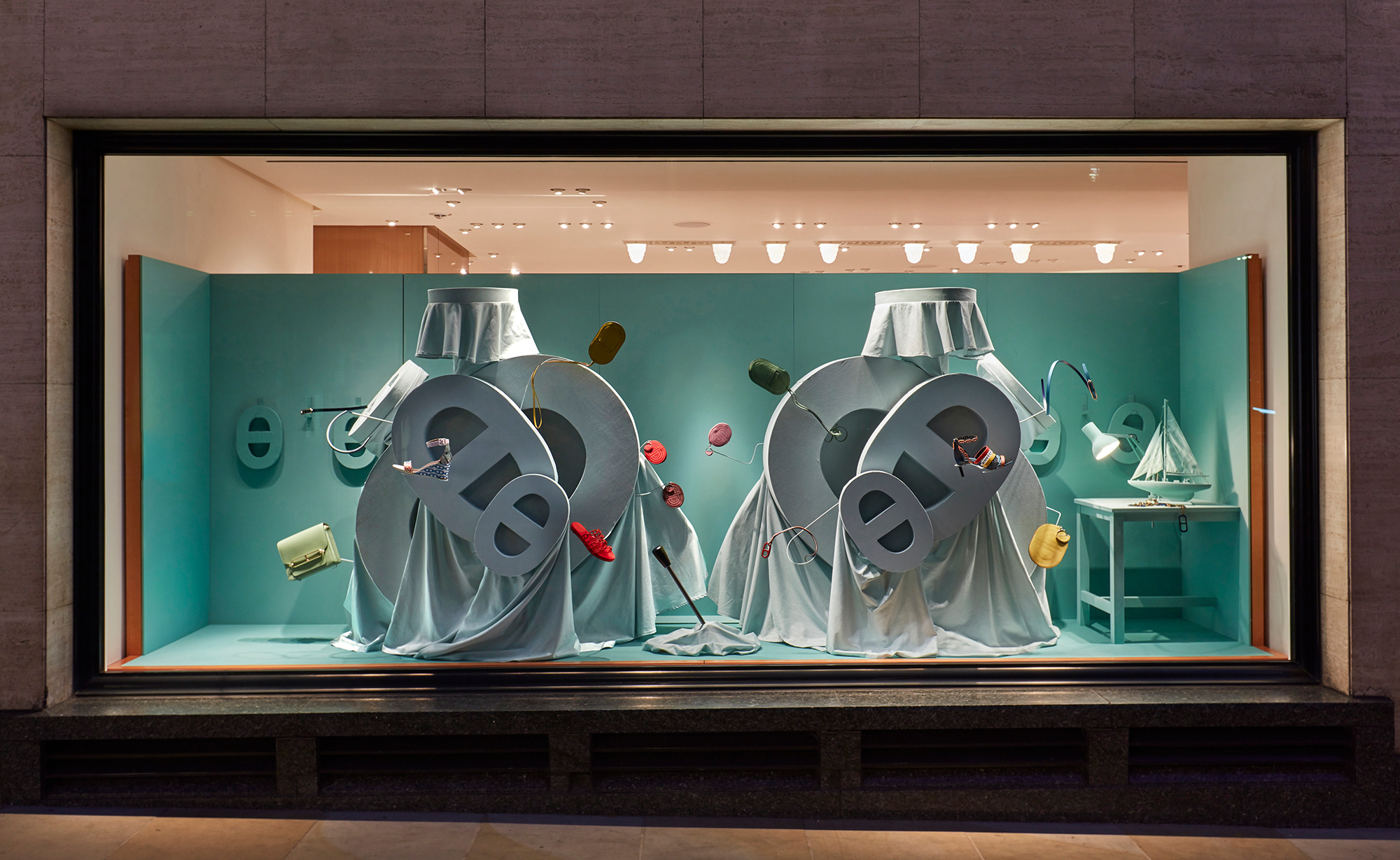 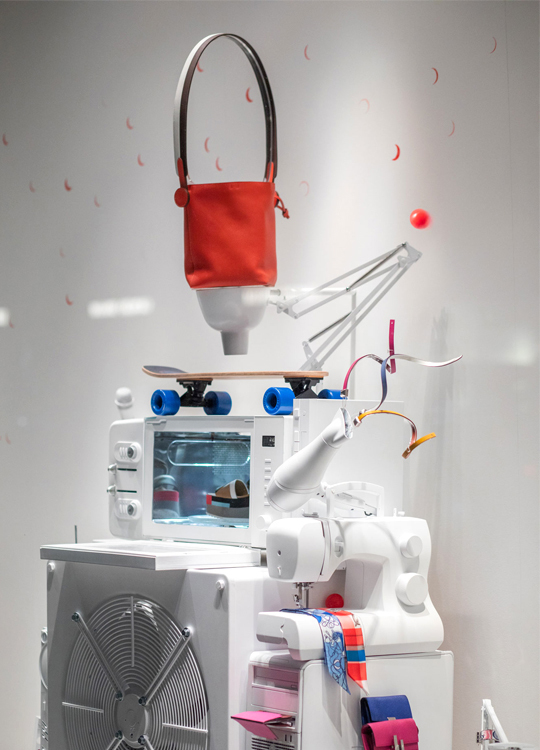 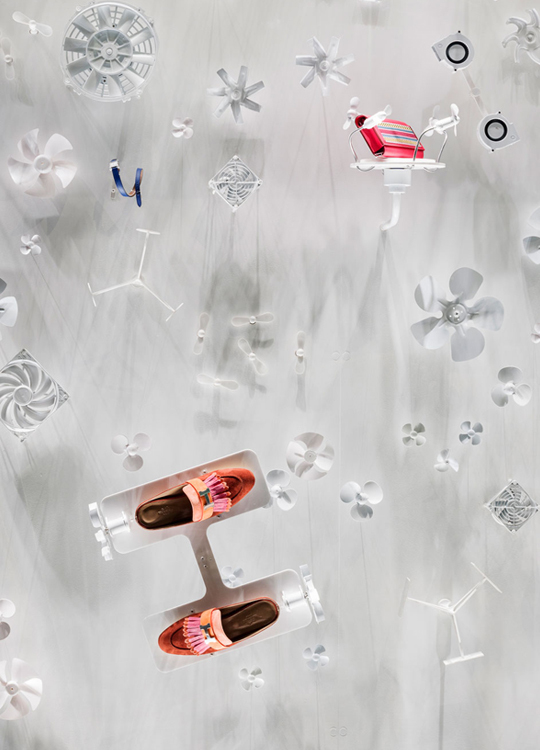 Isabel + Helen
"Working with the Hermès production team is always great. Their space is amazing; they have a big room where they lay out how everything will look, so you can just walk around the windows like they’re already installed."

Another client of yours is the British menswear designer Craig Green. How did you first get involved with Craig?
We had an ongoing personal project developing air dancers made from bin bags, and when we saw the Craig Green X Moncler collab on Instagram, with their exaggerated jackets and trousers, they really resonated with what we’d been doing. So, we sent some videos to his design team and they really liked them! Craig then commissioned us for his AW2018 fashion show in Milan. It was a back-and-forth collaboration from there. The final creations were two eight-metre-high pumping fabric towers (see video here for the final results)! We’d never pitched to anyone like that before, but it shows how important personal projects are because they can often lead to something more. 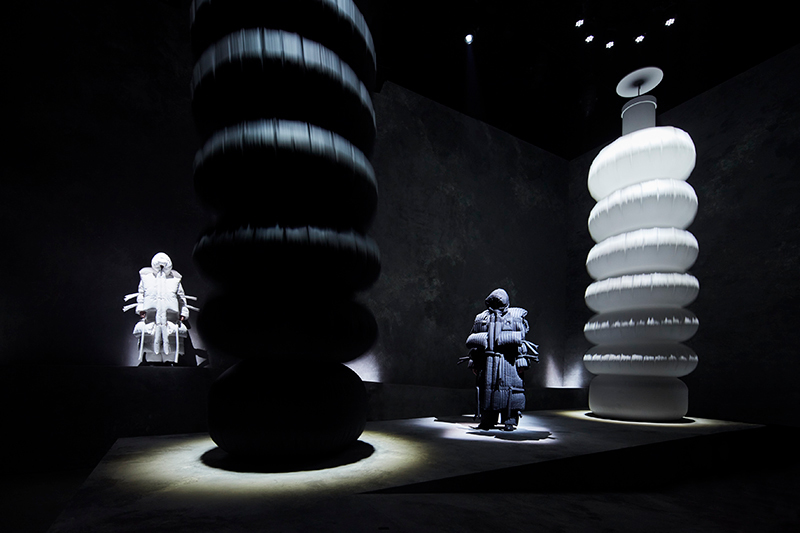 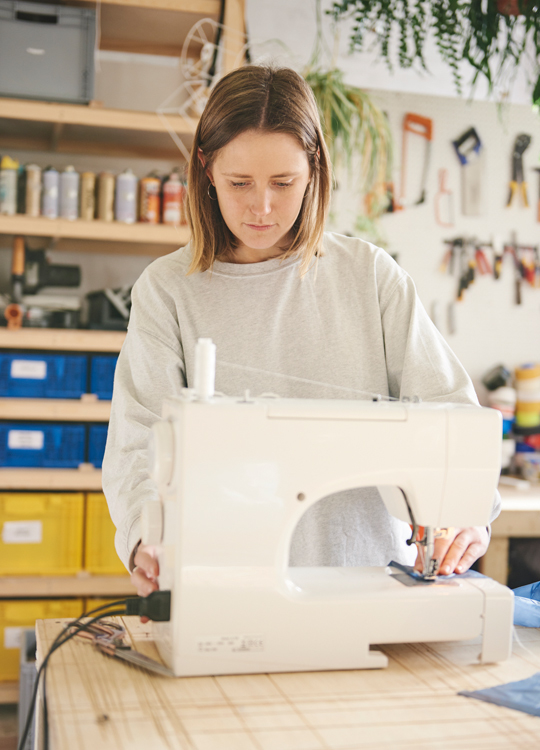 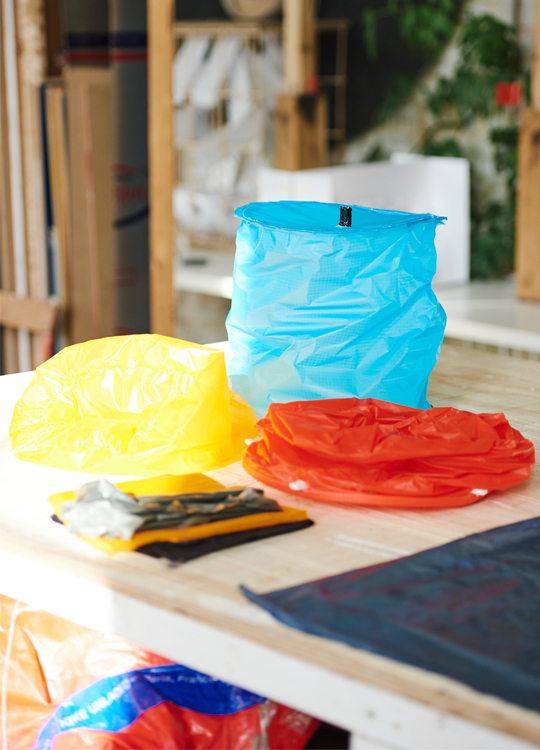 Do you think your style as a studio has changed since 2016?
Our style has developed in each job as we naturally do something slightly different each time. Every job has its own requirements, which then affects our approach. For example, with the fashion shows for Craig Green, the first was a live piece and the second was filmed, and then, when designing Craig’s retail space at Dover Street Market, it was really great to work on something more permanent.

Are there any other projects that you feel have been key in terms of your journey as a studio?
Creating the logo idents for ITV was quite a different project for us (see video below). To create the short videoclips, we used ping pong balls joined together with piano wire to create the ITV logo. We’re repeatedly drawn to ping pong balls—they move in such a gratifying way, and when blown with air, they bounce against each other and repel as if magnetic. The final idents look digitalised but everything was shot 'in camera’. These days we’re so used to seeing highly polished computer renders, but we feel there’s a real value that comes from having a tangible environment you can experience. 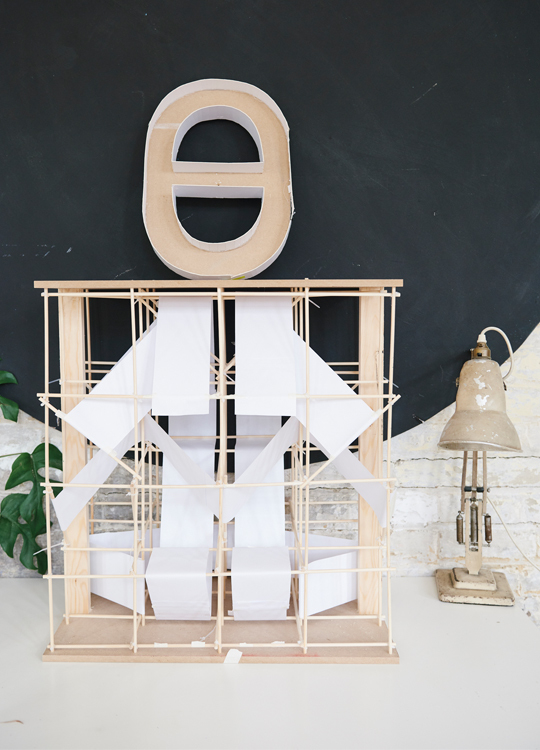 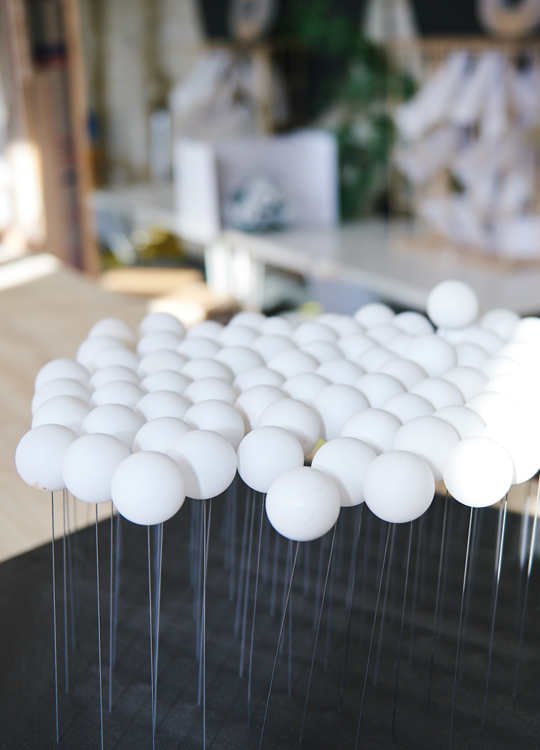 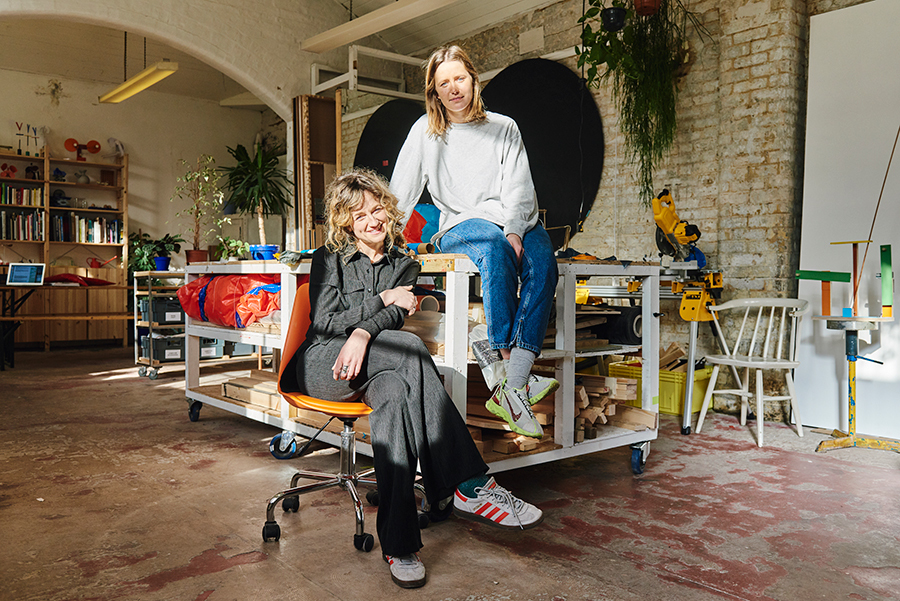 Finally, as things start to pick up again after lockdown, are there any new directions you’re keen to explore?
We’re taking time to reset and focus on creating a body of work that truly represents us. Ultimately, we’d love to take our kinetic sculptures into the public realm more, for people to interact with directly, or onto the stage in performance and theatre. Let’s see how the rest of 2020 pans out first! 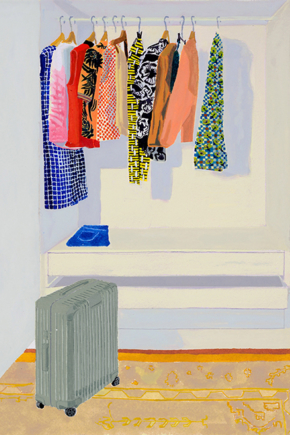 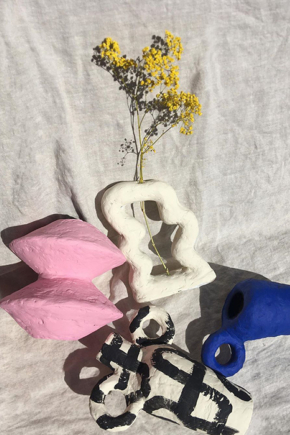