We visit the London-based fine art silkscreen and giclée printing studio Make-Ready to talk to founder Tom Murphy about making original prints for top contemporary artists and galleries, including Jeremy Deller, Boy George, Kelly Anna, Hauser & Wirth and Unit London. They’ve built a strong reputation over the last three years and much of this is down to Tom’s inherent passion for the process and eye for detail, which we delve into more with him here.
24.07.20 Interview by Wrap / Studio photography by Ollie Trenchard 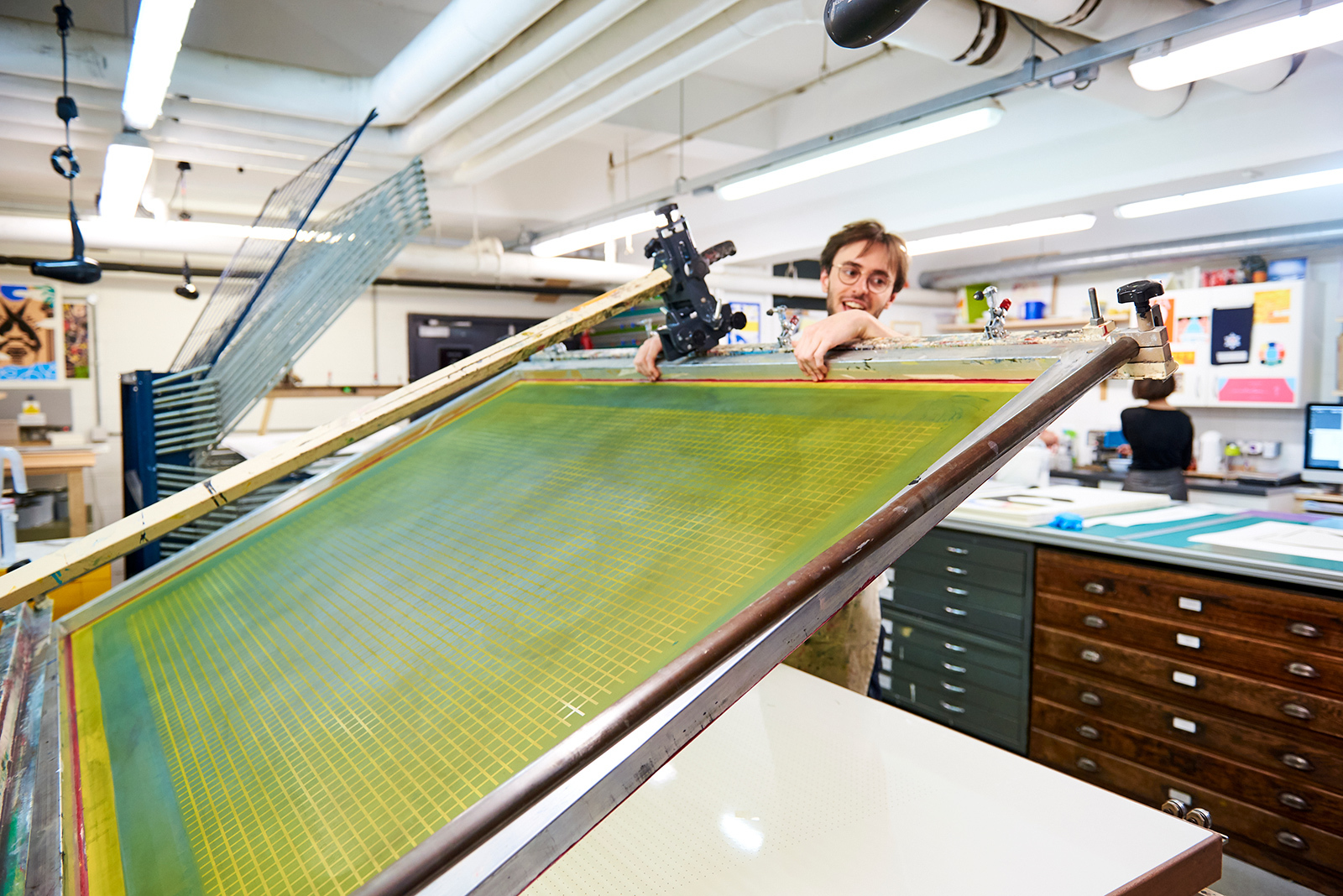 Firstly, we’re in the midst of a pandemic (we hope you’re all well!) – how are you guys coping?
It was tough having to furlough all our staff and watch most of our revenue evaporate, but with thorough financial planning and remodelling of the business we’re moving forward. A lot of projects that were already booked in were postponed until after lockdown, but conversely some new and exciting things have come through the door. Most importantly we’re keeping high spirits, good mental health and maintaining proper hygiene.

Tell us a bit about the studio, and the Make-Ready team…
We’ve been in this current space in Kentish Town for about three years – we had one unit to start with, but took on another one last December as we’d doubled in size. It’s fantastic being so close to central London and Hampstead Heath. Usually there are four to five of us working here, but at the moment everyone's on furlough apart from my co-director Catherine and me (I’d probably have a mental breakdown without her).

There are three main rooms; the digital/pre-press and finishing room, the imaging room and the press room. Each is designed to allow ease of workflow; you know everything’s working well when you don’t even notice it, but I’ve put a huge amount of thought and effort into allowing people to use the space efficiently. And we’ve just invested in a semi-automatic wide format printing bench from Kippax which means we’ll have the largest screen size (2.9m x 1.85m) in the city, so we're very excited about that. Together with our other three manual Kippax benches it’s going to be quite a set-up. 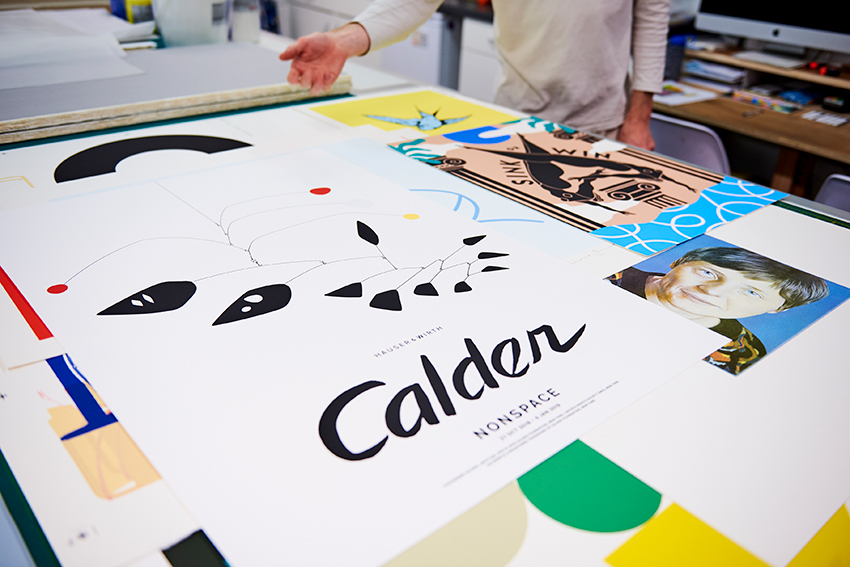 Tom Murphy
"Finish is hugely important – we use a lot of oil-based inks, which means we can have a tremendous impact with those finishes." 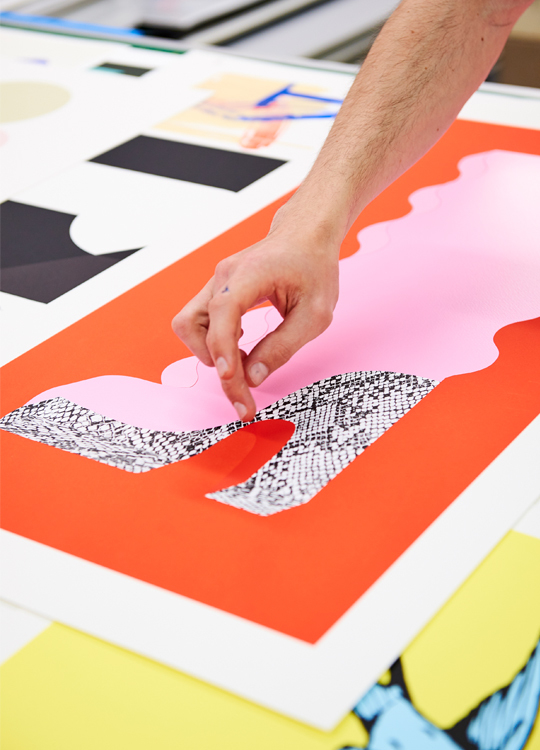 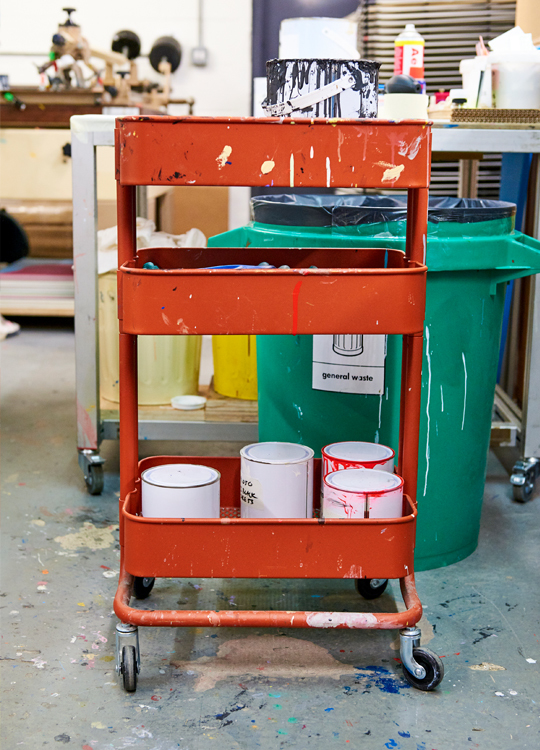 What’s your background, and how did you end up starting Make-Ready?
My background was originally in illustration and graphic design, which I studied at Central St Martins. After graduating in 2007 I went on to work for the fashion brand Orlebar Brown, where I found myself laying out line-sheets and look books and sending them off to be printed by Generation Press. Meeting them was very inspiring; occasionally I’d retouch photos and sometimes their retoucher would accidentally send PSD files which meant I could get a good look at clever uses of layer masks and Photoshop in general. That started me on a journey of developing a strong understanding of Photoshop and getting my head around image rendering.

I left there in 2012 and started silkscreen printing for myself in an open access studio. It was very amateur, but a perfect time to make a thousand mistakes. I began working with the artist Oliver Osborne during that time, which was my first taste of producing large-scale works of art that would be shown in credible galleries. He remains a pivotal artist for me.

And after five years I went on to work at K2 which was a massive eye-opener – the scale of everything, the colours, even the smell was incredible! I worked on prints for major artists including Helen Marten, Yinka Shinabare and Damien Hirst, so it was quite an experience. Everything had to be right, everything had to fit or you’d be going home. After some creative differences, I thought I could improve on the process and work for my own contemporaries. I decided to leave and start Make-Ready in 2017 with, in hindsight, a pitiful amount of money and a credit card. Admittedly I’ve spent the last three years unpicking habits learnt from previous experiences and writing my own method – creating a look and feel to our prints that I believe sits alongside the three big hitters in the UK; Jealous, Coriander and K2.

How did you think you could fill a gap in the world of silkscreen printing?
If you spend five minutes on Instagram looking at screen printers, the same names come up and you get a really strong idea of what the current zeitgeist and aesthetic of screen printing is. Then on the other hand, you have people like Coriander Studio, working silently and amazingly using old-school silkscreen techniques to create their work – that’s the work we really admire, and that inspires us. So that's the gap that we wanted to bridge really, to bring the old-school techniques used by studios like Kelpra and Domberger to an engaged audience on social media. 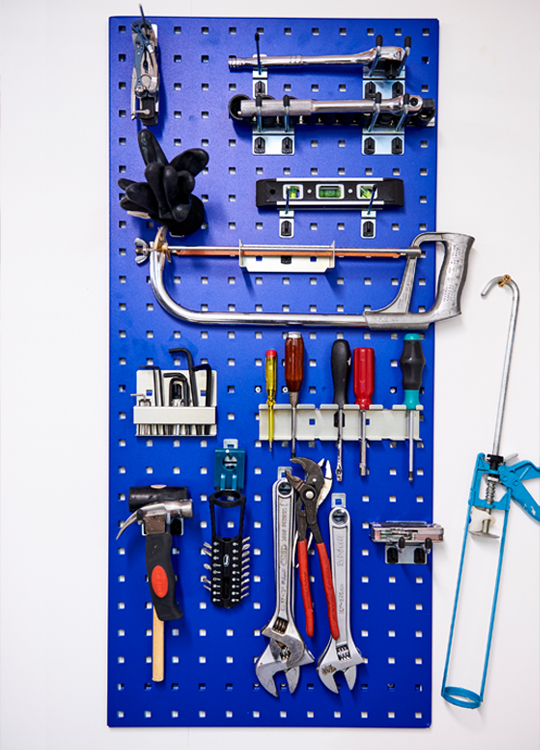 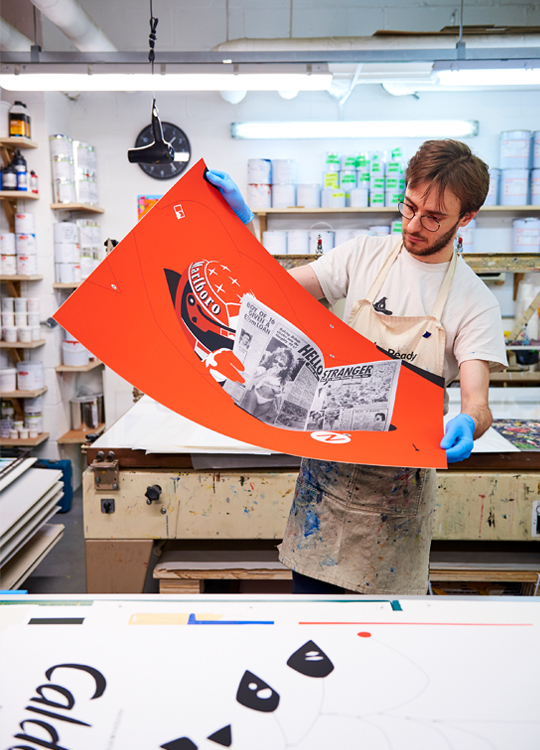 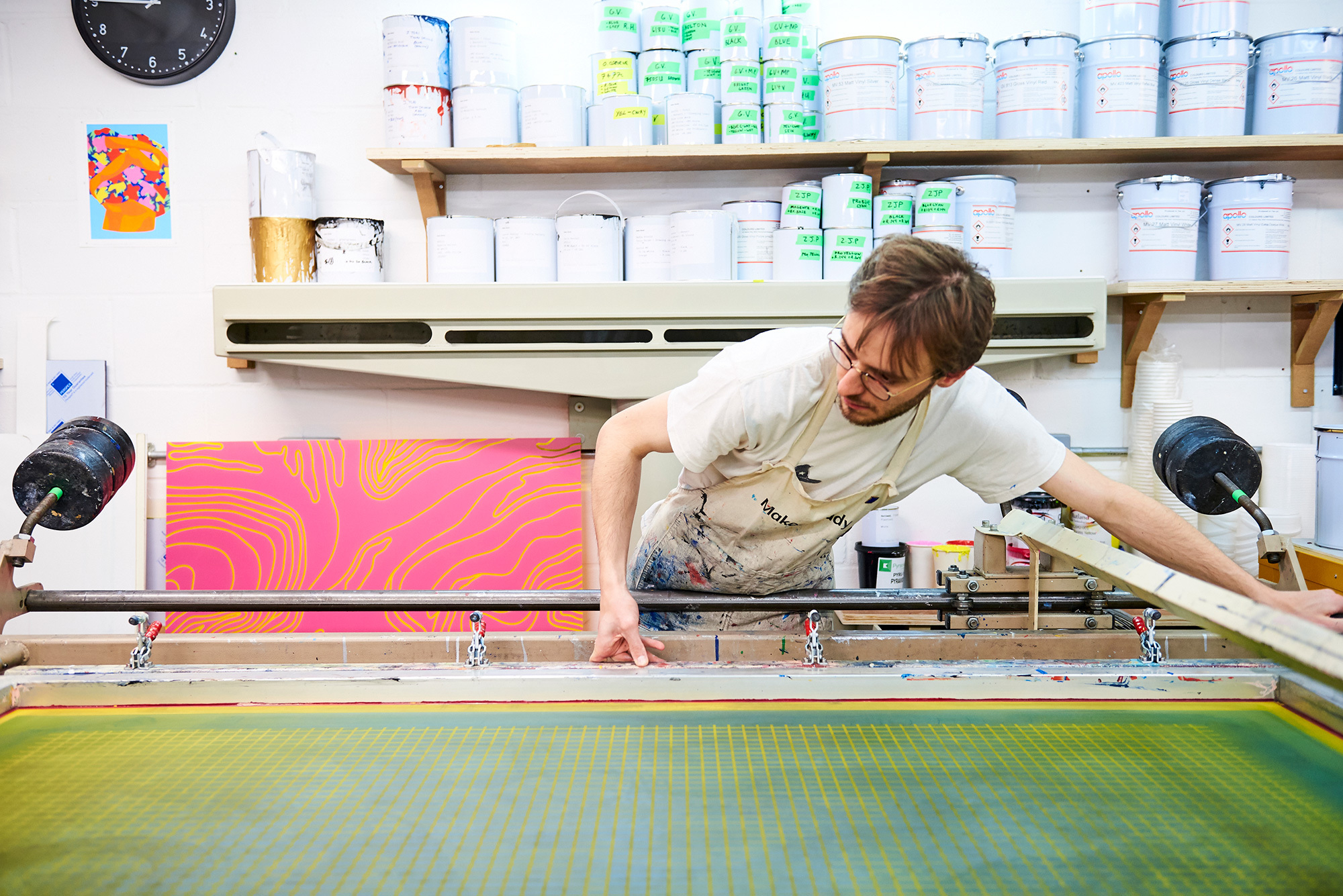 Do the techniques you use create a different quality print to other studios?
Yes, techniques affect the feel of the print, they create depth and dimensions. Finish is hugely important – we use a lot of oil-based inks, which means we can have a tremendous impact with those finishes. That’s why our prints are different; the vivacity of colour, overprinting, opacity, stability, interlayer adhesion and all round control of oils is incredible. They’re certainly more advanced to use, as most of the best inks we use aren’t actually designed to print on paper. The difference and quality comes from lots of minor changes exponentially working together, so that when you see the work framed in a gallery, you just think, “Wow, that's amazing.”

The software we use is also really important – understanding the digital rendering side and RIP software is another way in which we are more similar to the older studios. And these days silkscreen printing is so digital. And although everything works in tandem, I do put a huge emphasis on stencil making (film preparation, coating and exposing). There are many different correct ways to do it for different printing applications, and with a proper understanding of this pre-press process nearly all your problems on-press can be solved. It’s something that's drilled into you from day one here at the studio. 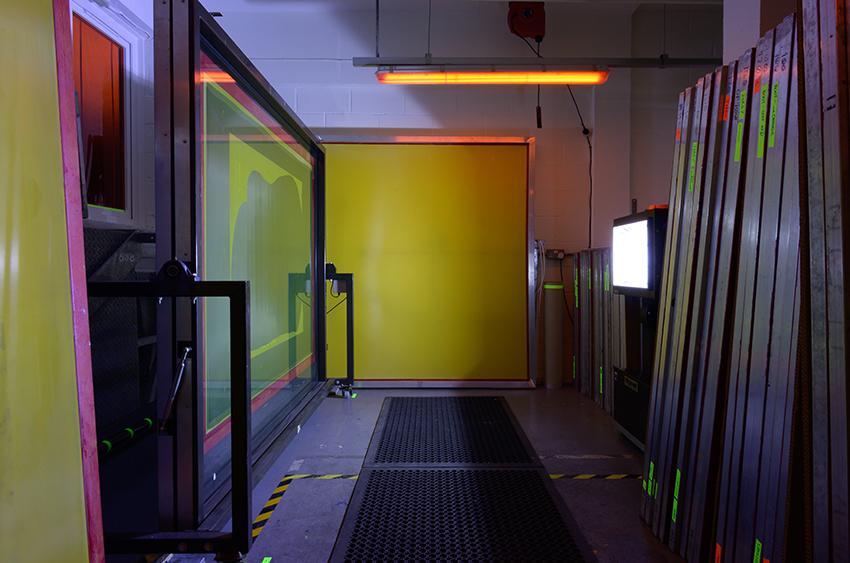 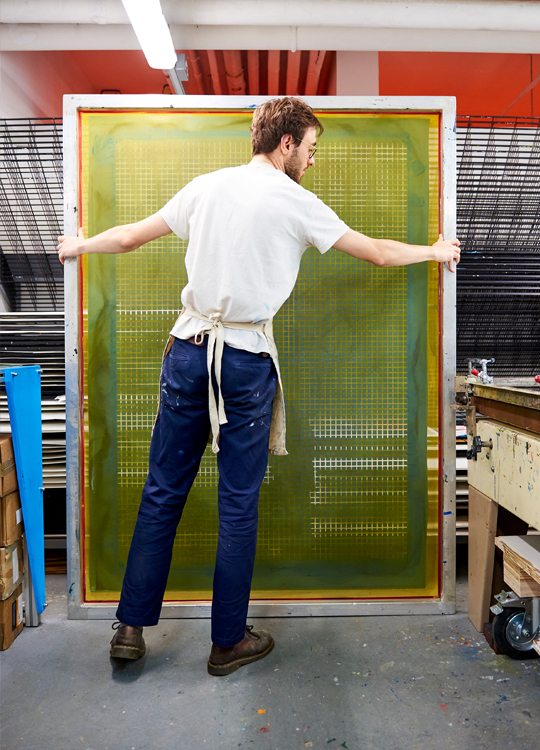 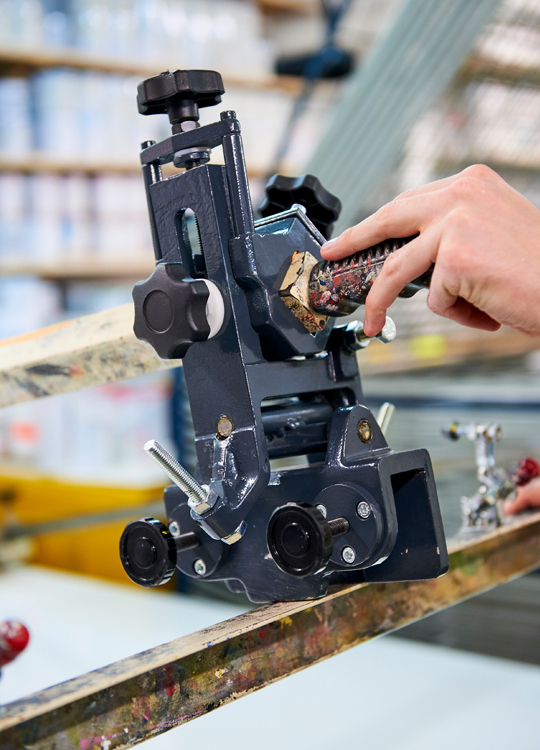 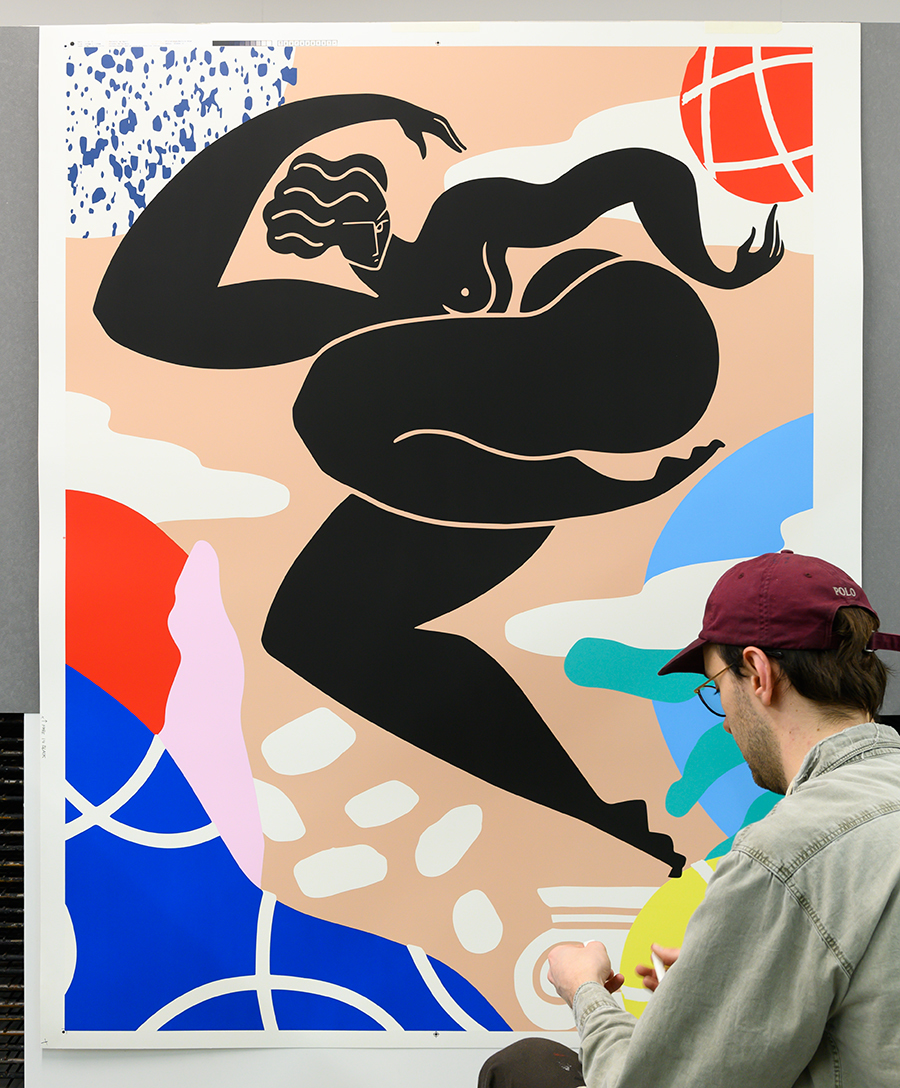 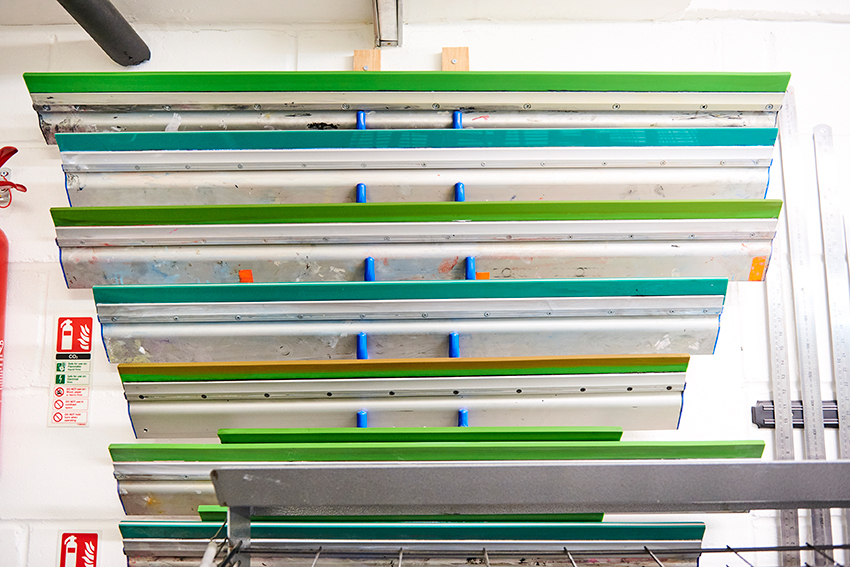 You worked with the illustrator Kelly Anna last year to make some incredible prints that were huge – what’s it like printing on such a big scale?
Printing Kelly’s work is always a pleasure; bold, vivid, flat colour is harder than it looks to get right, but it’s ultimately one of the defining characteristics of silkscreen printing and why artists such as Patrick Caulfield, Richard Estes and of course, Warhol, used it so much. Printing larger formats can be tricky as there can be a lot of pressure – some of the large sheets we use are over £60 each – so it’s important to stay calm on-press. It’s all about the set-up, and knowing your print scenario.

Tom Murphy
"Printing Kelly’s work is always a pleasure; bold, vivid, flat colour is harder than it looks to get right, but it’s ultimately one of the defining characteristics of silkscreen printing and why artists such as Patrick Caulfield, Richard Estes and of course, Warhol, used it so much."

Are there some recent projects you’re especially proud of?
We just worked with the gallery UNIT London to make a 28 colour glow-in-the-dark print, which is really stunning. And our favourite project to-date has been helping Boy George realise his artworks as oversized silkscreen prints which have multiple glitter embellishments. He’s an incredible person, and a real pleasure to work with.

We’re also working on publishing original silkscreen prints ourselves, which will be a big move for us as a studio and a fantastic way to collaborate with more artists. Our first will be with Jordy van den Nieuwendijk – we’re developing a print of one of his paintings in about 30 colours. 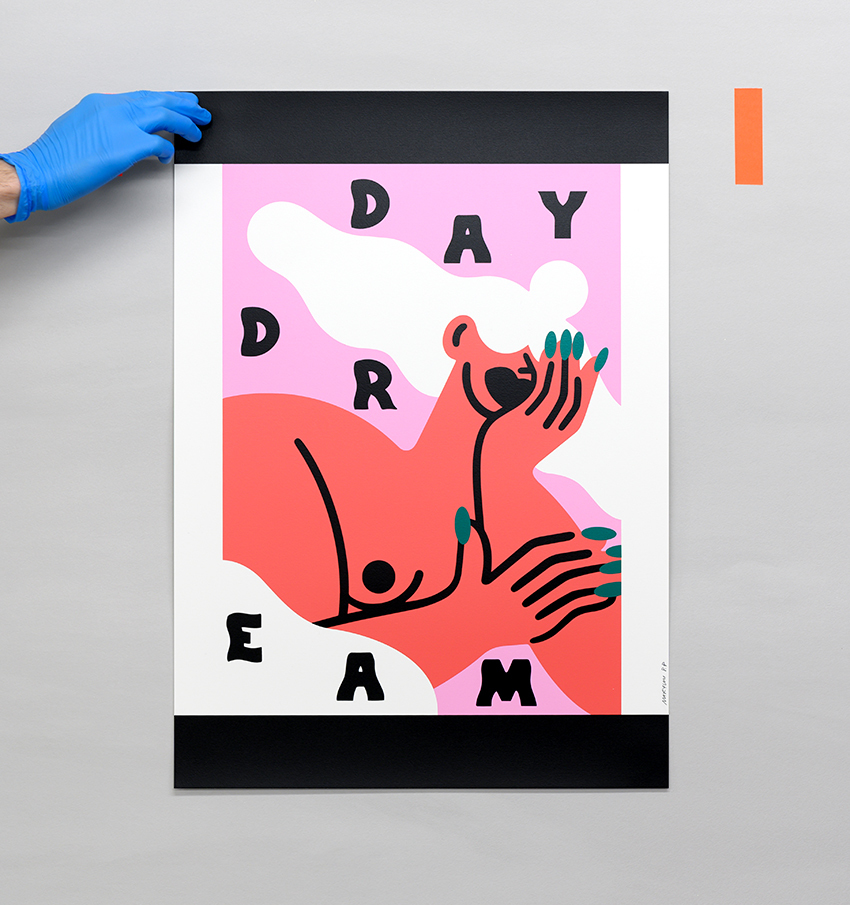 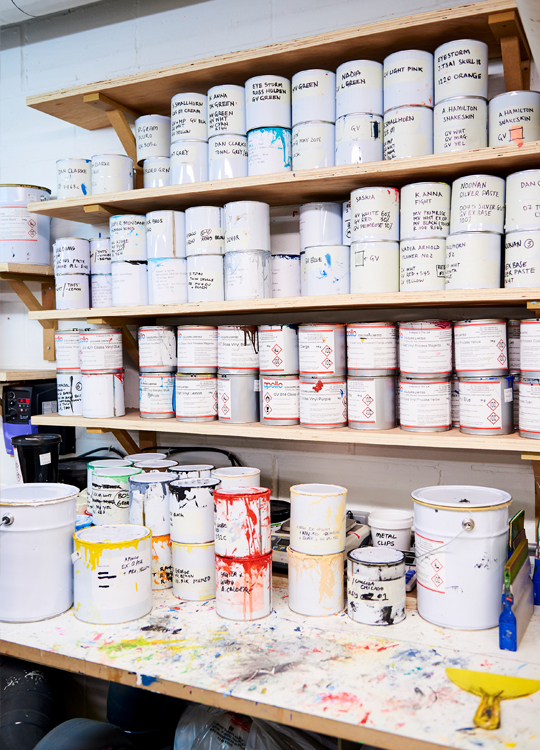 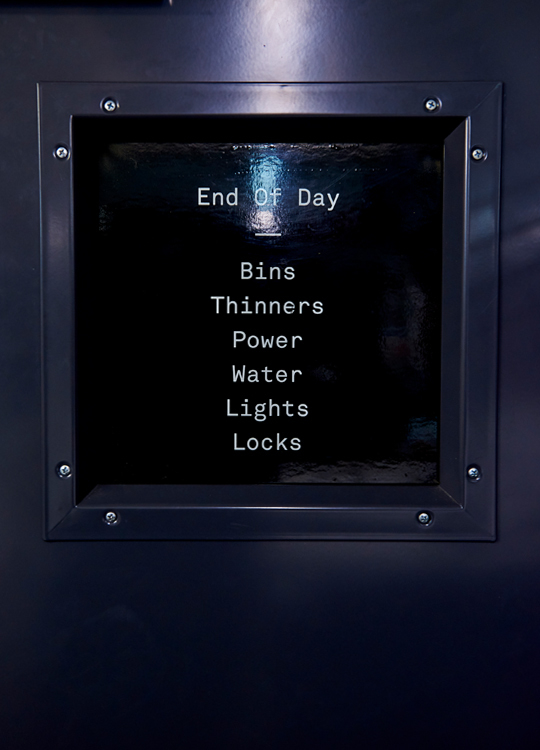 And finally, what will you be most looking forward to about getting back into studio life?
Seeing other people again – it’s just been Catherine and me keeping things ticking over during lockdown. And having artists visit the studio; it’s really important to us as a business, and a fundamental part of what we do. 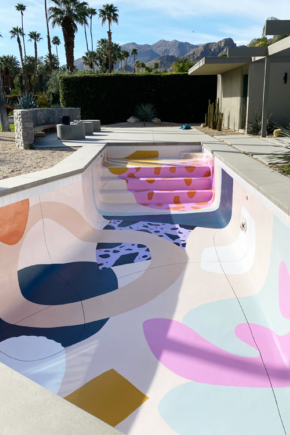 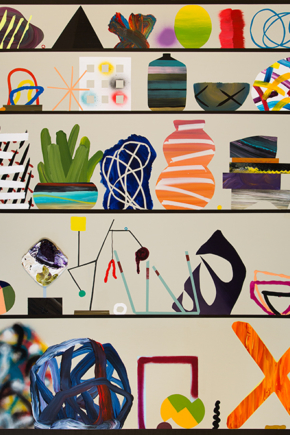