Rotterdam-based illustrator Seb Agresti explains why personal exploration and re-examination are crucial, when it comes to his artistic practice.
22.04.21 Interview by Hannah Valentine 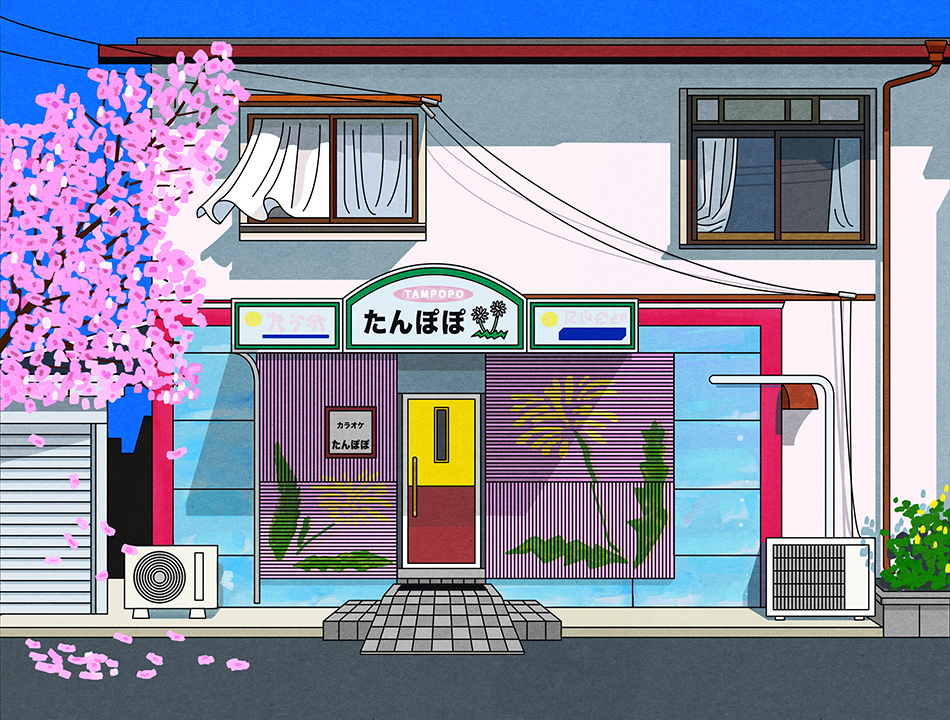 For many illustrators, maintaining the relationship between staying true to your personal style and keeping the client happy is tricky. Dutch illustrator Seb Agresti admits that finding the perfect balance can be a struggle. Creating editorial illustrations for publications such as The New Yorker, Frieze and The Atlantic, as well as working on projects for brands such as Google, Warby Parker, and Apple, Seb explains that while client work is often rewarding, the tight deadlines and fast turnovers can be exhausting, leaving little time for artistic exploration.

Taking occasional time off from commercial work is important to Seb, in order to rediscover his own artistic priorities and focus. A recent artist’s residency at Studio Kura in the small Japanese town of Itoshima gave him the opportunity to do just that; soaking up new perspectives and applying his design processes to new environments. Seb’s belief in the importance of personal exploration has been central to his practice since studying at Rotterdam’s Willem de Kooning Academy; finding that pursuing his own initiatives was a more rewarding learning experience than following the limited and sometimes restrictive guidelines of the academy.

We caught up with Seb to hear more about his recent residency, how his style has evolved over the years, and about staying unique in the world of Illustration. 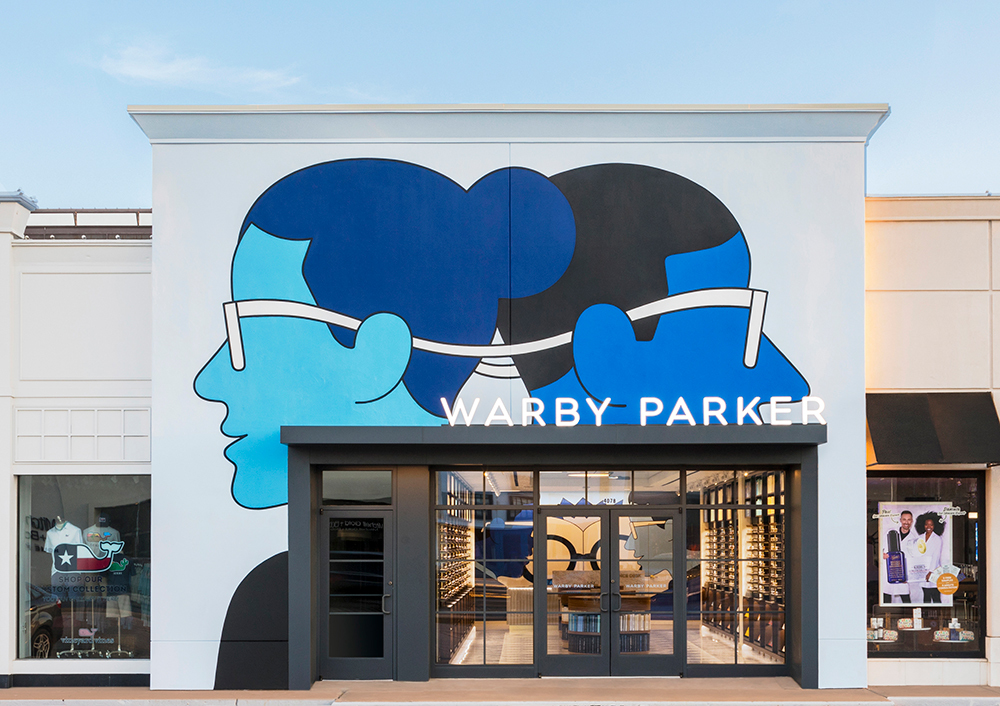 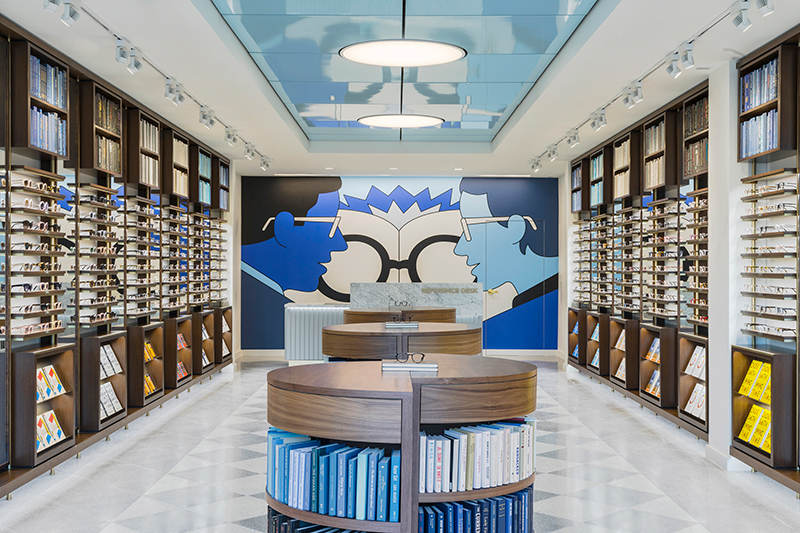 Talk us through your process. How do you create your illustrations?
In recent years I have been slowly transitioning over to working digitally, despite having mostly worked with more traditional tools such as pens, paint and ink throughout art school and my first year of freelancing. One of the reasons has been the increased number of tight deadlines and the need to edit and deliver my illustrations to clients quickly.

Another reason is that I wanted to figure out a way of working that involved a small number of tools that I could fit into a backpack and avoid being tied to a studio space. I like the flexibility of working digitally and trying out a lot of things, moving objects around or creating several versions of the same drawing on the same screen.

Is there anything you miss about working with more traditional artistic tools?
One of the charming effects of working with traditional media is that you have only about 90% control over the tools you use. It's little things like colour pigments clustering together at certain areas of the paper or the way dirty water affects the colour of paint, which is not a thing that happens when working digitally. A computer does exactly what you make it do and with mathematical precision, which can make an image look flat or lifeless, or even worse, be dictated by software if you have no idea what you are actually clicking on.

This is why I encourage illustrators who are starting out to experiment with traditional media, so they understand why things look a certain way. In essence, the digital tools we use are all developed in a way as to mimic traditional media. I occasionally use scanned textures to achieve a certain grainy effect, but I've also tweaked several digital brushes to mimic wet in wet techniques and use them in such a way I would do for a traditional process.

Tell us about your recent residency in Japan, and the work you made there. Do you think the experience has changed how you approach your work at all?
I spent five months in Fukuoka, four of which I stayed at Studio Kura in the small town of Itoshima as an artist in residence. I needed a break from commercial work and wanted to explore new ways of working. I drew mostly land and cityscapes, working from observation rather than from conceptual ideas, which are usually the starting point of editorial illustrations. My surroundings looked so different from what I was used to that I became hyper-aware of all the little details and colour palettes, which subsequently influenced my work. When working from memory, it's easy to fall back on similar ideas or visual solutions. Working from observations provides you with things you haven't seen or drawn before. 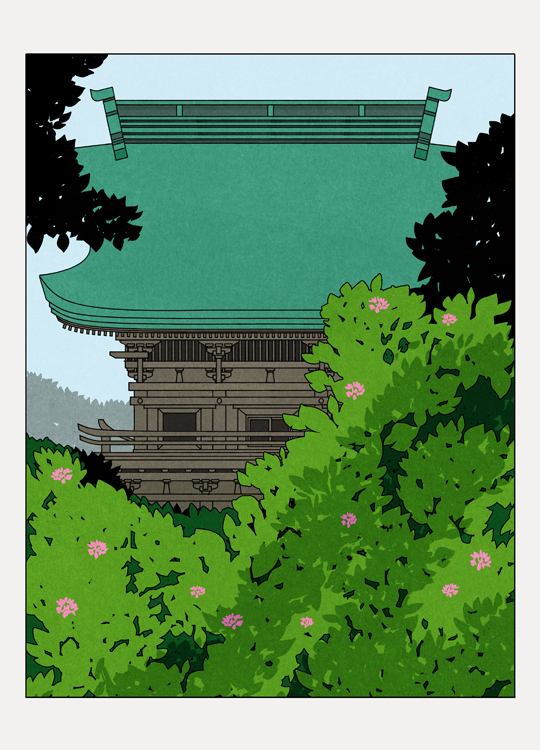 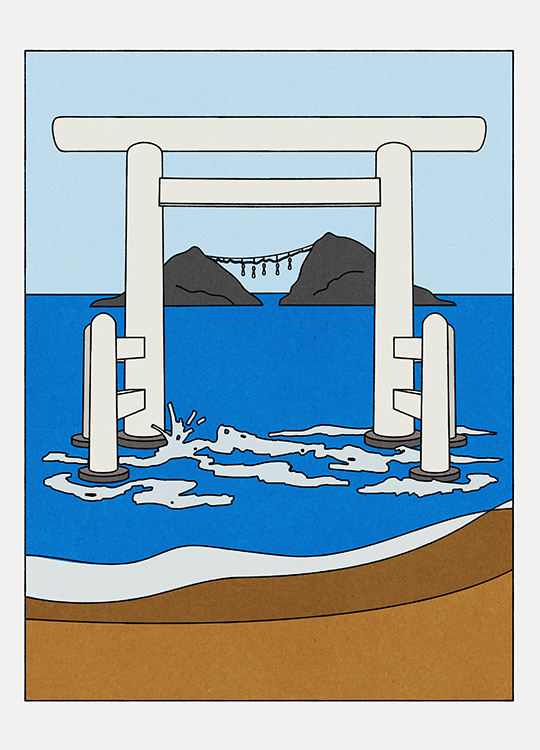 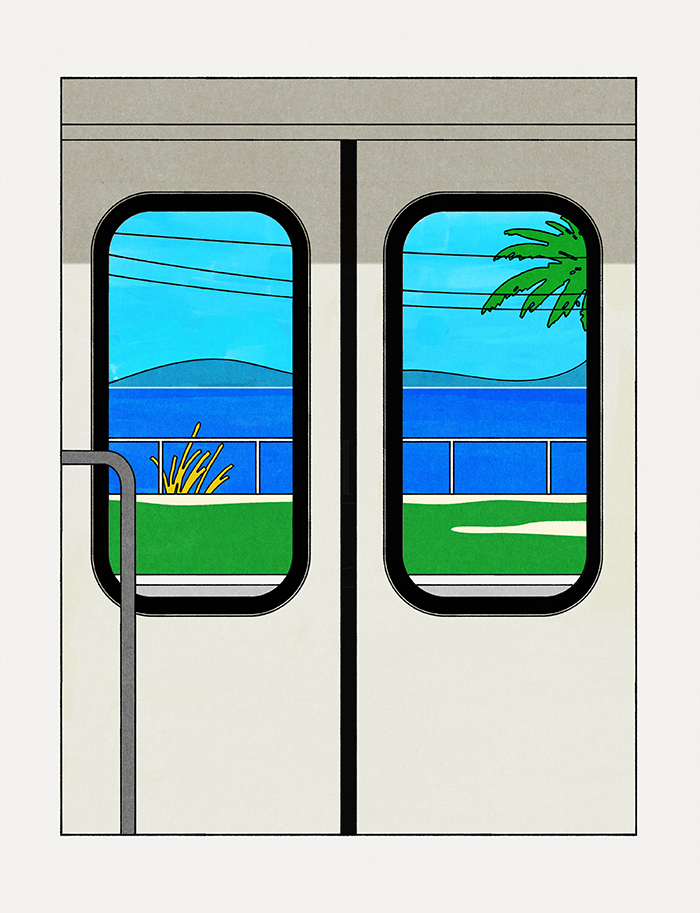 Seb Agresti
“During my residency I drew mostly land and cityscapes, working from observation rather than from conceptual ideas, which are usually the starting point of editorial illustrations. My surroundings looked so different from what I was used to – I became hyper-aware of all the little details and colour palettes.” 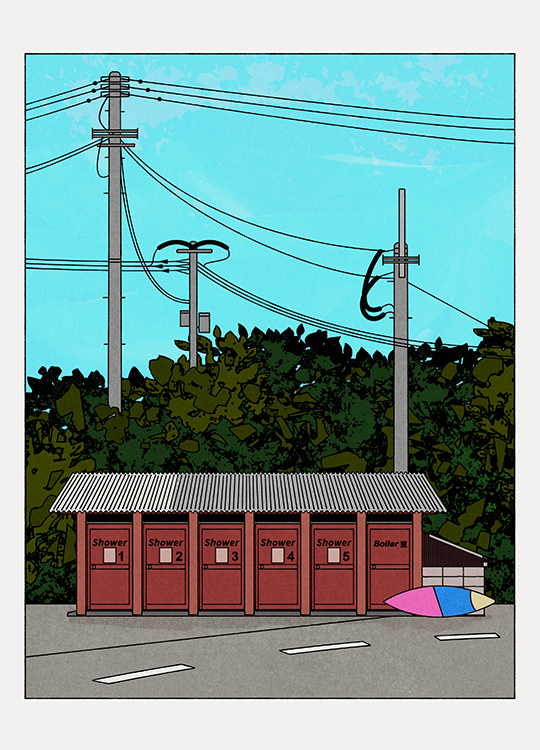 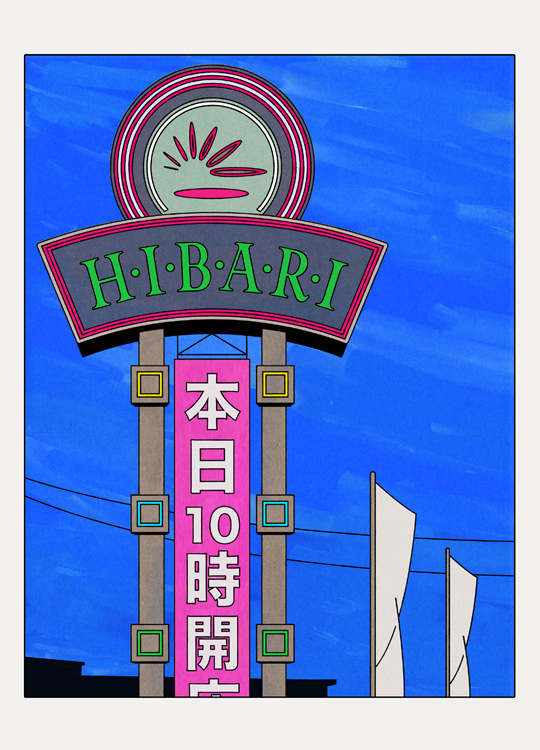 Your ongoing portrait series for Dutch newspaper De Volkskrant explores race relations in the USA, with each portrait and its accompanying article highlighting the life of a different Black American intellectual or artist. What has it been like working on this project?
I love the research that comes with projects like these. The most exciting thing for me about doing any kind of editorial work is learning more about the world and humanity. A lot of portrait illustration out there is all about likeness dipped in a visual style, but I am much more interested in highlighting the individual’s background and what makes them unique. I have loved including these little details that few people might even notice in the final drawing.

For instance, for the portrait of the novelist and literary critic Albert Murray, there's a painting hanging behind him by his good friend the artist Romare Bearden. In scholar and novelist Ralph Ellison's portrait, the shapes of the shadows on his face are a reference to his iconic book cover for Invisible Man and his reflection on the window next to him layers a transparent outline over the city of New York, a metaphor for being invisible in your society. It's hard to pick the most inspiring person from this series because all of them have had to struggle in ways I can't even imagine. All of them are worth looking up, and looking up to! 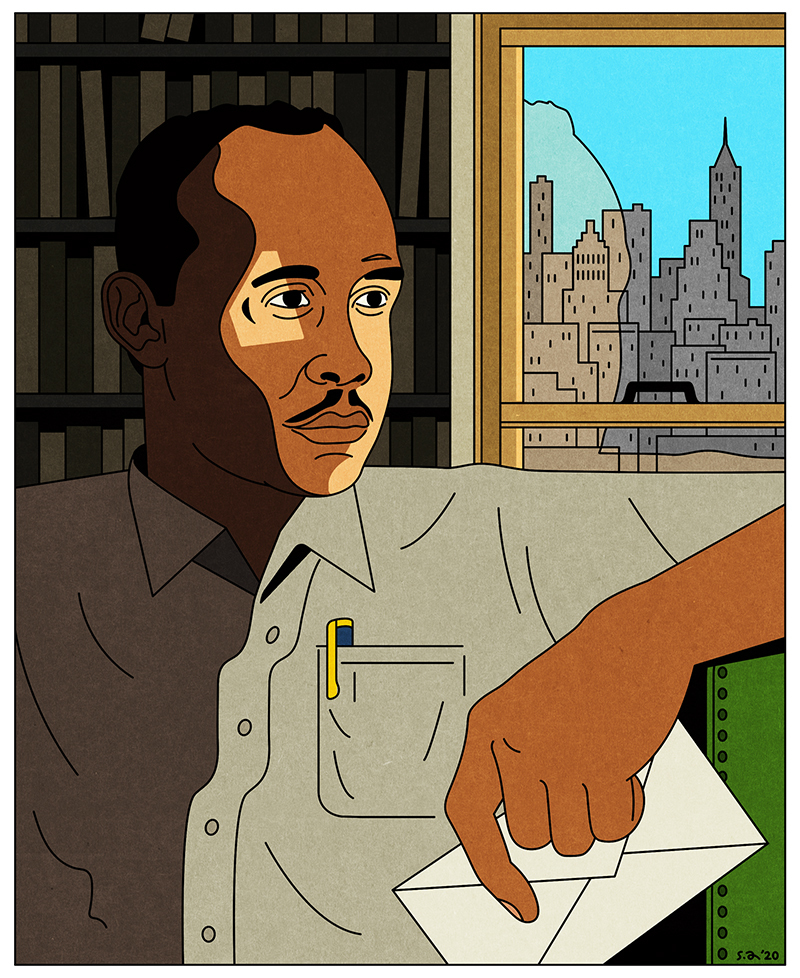 Seb Agresti
“I love the research that comes with projects like these. The most exciting thing for me about doing any kind of editorial work is learning more about the world and humanity.” 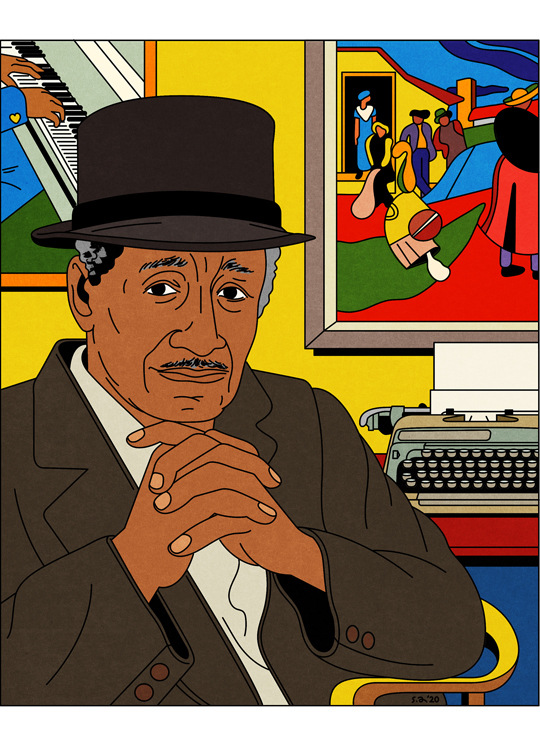 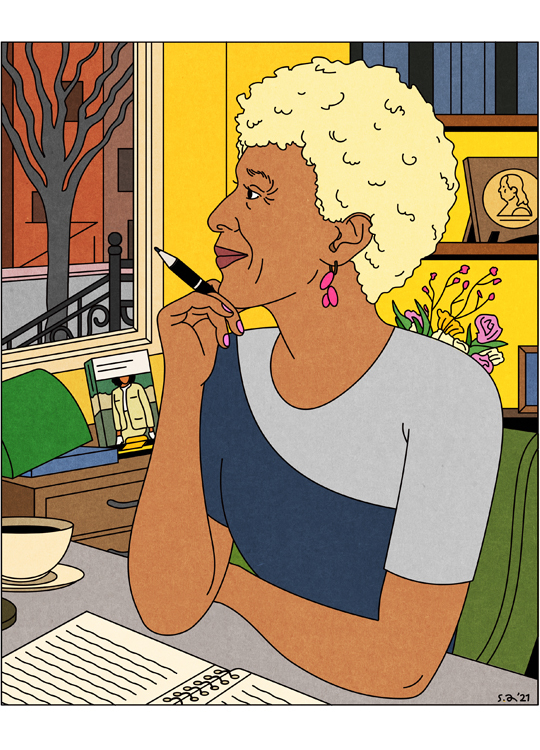 If you were to create a self-portrait in this style, how would you draw yourself?
I would surround myself with books and objects related to the things I love. There would be many graphic design books, rare vintage Japanese toys, and handmade ceramics in the background. I recently did a self-portrait wearing a mask, and I would use something like this again to signify the crazy times we live in right now. 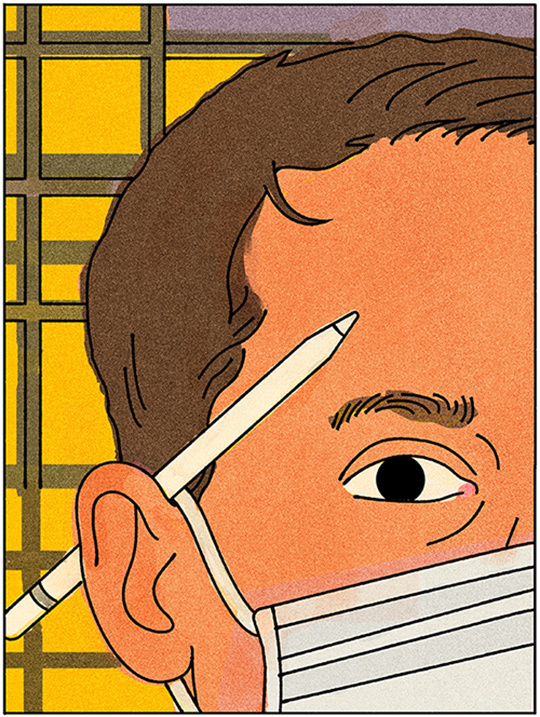 Let’s talk about the way your artistic style has evolved over the years. Looking at your older work, it looks a lot more stripped back, and increasingly, you seem to be including more detail and variety of colour. Why is this?
One of the reasons is that I feel that the illustration scene has become quite saturated with similar looking work in recent years. Illustration has always been full of trends and fashions, but with visual media like Pinterest and Instagram many people who are starting out see the same things and the same style over and over again. A new generation of art directors who often have a background in branding or design instead of illustration might also be a part of this development. I always find it a bit heart-breaking when I receive a design brief which is essentially a style sheet for how the final illustration should look.

It's hard to change your visual style in illustration. You're asked for the last thing you did, not for the next thing you want to make. I understand it from the client's perspective, but it's the reason I occasionally take a break from commercial work to experiment. Periodically, I look at my work and ask myself the question: how does this relate to the work of the many other illustrators out there? This is one of the only reasons why I would recommend going to art school. Seeing 30 people working on the same assignment forces you to look at what makes your work unique, and I think it's vital to recalibrate once in a while.

Finally, what's the most important thing you've learned from being an illustrator?
Work is only fascinating if it's personal. 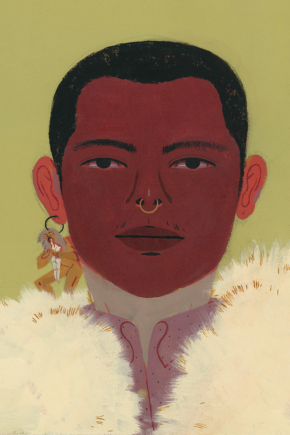 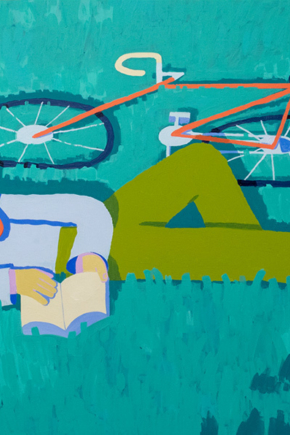